The Georgia Tech Research Institute (GTRI) has executed investments and won programs to enter the research field of radio frequency (RF) photonic integrated circuits (PIC). The technology improves the government's ability to operate in the millimeter band, which has become increasingly congested amid the push to 5G mobile technology.

RF photonics helps address this issue by first modulating radio frequency signals onto an optical carrier for broadband signal processing. Such systems can be further miniaturized through RF PICs, which use microelectronic fabrication techniques to build compact circuits that manipulate light.

BLUESHIFT, a significant investment that concluded in 2021, develops capabilities at GTRI to help the government access this emerging technology through design, fabrication, and demonstration of prototypes through an array of external foundries.

Challenges of the PIC research landscape include a relatively immature fabrication ecosystem, lack of robust packaging solutions, and limited investment dedicated to government applications. Since the conclusion of the project, the capabilities established through BLUESHIFT are actively supporting sponsored programs across multiple labs and military branches of service.

"We're at this inflection point where the ability to fabricate PICs is about to significantly improve, both for us and our adversaries," said Benjamin Yang, a GTRI senior research engineer who is leading the BLUESHIFT project. "The goal of BLUESHIFT is to better prepare the government to take advantage of this inflection point by leveraging our ability to understand the PIC applications they're interested in, and to establish our processes and capabilities to take a chip and get it into a form factor that can accelerate the adoption into their existing RF systems."

Yang added that the introduction of 5G lowers the barrier to access to the millimeter wave regime of the electromagnetic spectrum. This shift places greater urgency to accelerate the defense industrial base’s innovation cycle to respond to new threats and maintain a technological advantage.

"The traditional RF spectrum is becoming congested, resulting in an expansion of operations into the millimeter wave regime," Yang said. "There's a lot more spectrum that you have to monitor to see what's going on." BLUESHIFT helps government partners maintain access and effectively operate in this expanded spectrum, Yang explained.

Development of BLUESHIFT was supported by GTRI’s Independent Research and Development (IRAD) program and won an IRAD of the Year award in fiscal year 2021. 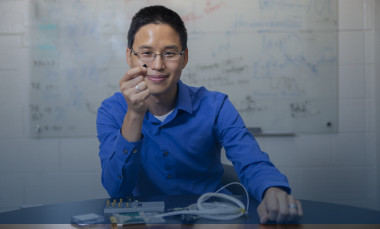 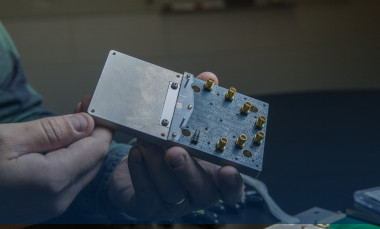