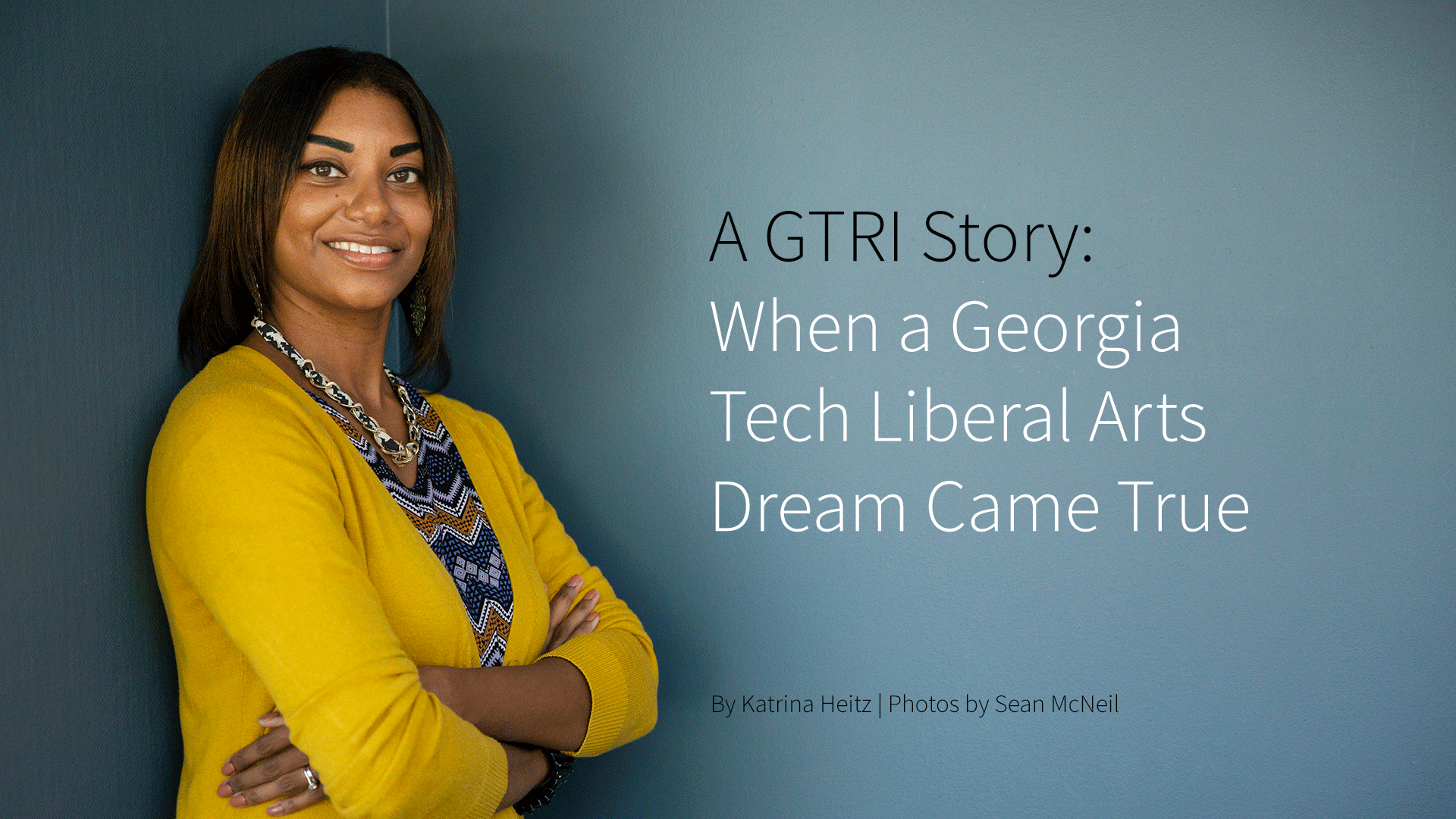 The clock would strike midnight and Michelle Gowdy would still find herself sitting in the Georgia Institute of Technology’s (Georgia Tech) library studying and working on her projects.

Looking up from her desk, she would see so many of her classmates around her and realize “we’re all in this together.” Twelve years later, Gowdy sits in her office at the communications department as the Georgia Tech Research Institute’s (GTRI) senior graphic designer and as an accomplished expert in her field, reflecting on how her Georgia Tech journey has come full circle. Gowdy is an example of how the Institute’s pillars around leadership, excellence, and innovation can bring a student through some of the toughest undergraduate challenges to achieve amazing career results – all under the umbrella of her alma mater. Gowdy shares her GTRI Story.

Michelle Gowdy tells how her GTRI story starts and continues.

The Georgia Tech Funnel of Talent

Gowdy is one of the many Georgia Tech alumni who transitioned from campus into GTRI offices and labs. White and Gold pride runs through the organization, spanning GTRI’s reach from coast to coast. In fact, GTRI is the largest employer of Georgia Tech alumni, with contributions from 595 graduate and undergraduate student on sponsored project during the 2017 fiscal year. Thus, as homecoming season rolls around, Georgia Tech alumni buzz around the Research Institute with pride as they reflect on the growth they owe to the Institute.

As the applied research and technology division for the Institute, the transition from undergraduate or graduate life into a technical role may sound simple, but as Gowdy shares, the journey from the acceptance letter to a professional role can get hard when you don’t necessarily fit into the traditional technical role.

I loved art – that was just my thing, but I also loved computers and the new wave of technology.

In Gowdy’s case, her GTRI story started on the green fields and student filled steps on Georgia Tech’s campus. A born and raised a Georgian, Gowdy first heard about Georgia Tech at a young age. She learned of its prestige and reputation, but to her the Institute only equated to engineering.

“I loved art – that was just my thing,” Gowdy stated, “but I also loved computers and the new wave of technology.” It was Gowdy’s sister who first introduced her to the concept of graphic design, which was a perfect combination of her two passions. The question then became, where could she go to explore her interests?

When considering liberal arts degrees, Georgia Tech may not be the first college that comes to mind. However, in reality, Georgia Tech has a flourishing liberal arts program through the Ivan Allen College of Liberal Arts that is dedicated to merging the humanities with a technological background—providing a human perspective in our present technological world. After a bit of research, Gowdy discovered the program titled Science, Technology, and Culture (STAC), which perfectly encapsulated her passion.

As Gowdy sent in her application, she was unsure of the outcome. As of 2018, the acceptance rate for Georgia Tech is only 22 percent. Beyond the acceptance rate, Gowdy also had to face the gender divide that was prevalent on campus during the early 2000s. While the most recently accepted class is now 41 percent female, when Gowdy attended Tech, only 27.7 percent of the campus was female. But soon all of those thoughts would be silenced.

“All of a sudden I get the ‘you’ve been accepted to Georgia Tech’ letter and I was beyond surprised. They want me? Because when you think Georgia Tech, that’s the pinnacle of education,” said Gowdy. The more Gowdy learned about Georgia Tech, the more excited she became. Unfortunately, she was met by doubt. Being accepted was the first step, Gowdy then had to face the challenges that follow being an underrepresented female student pursuing a liberal arts degree at a technical school. Isolation and doubts in her abilities made her wonder if she could successfully make it through. Rather than letting doubt weigh her down, Gowdy set out to prove them all wrong.

“I put in the work. I remember the long hours at the library. I remember the sleepless nights. I remember the tears. I remember failing my first class. All of that, but I made it!” Her hard work came to fruition when she was selected as a recipient of the Tower Award from the Georgia Tech Office of Minority Education and Development (OMED) – an award that celebrates the academic achievements of traditionally underrepresented Georgia Tech students. Gowdy regards walking up to receive her award in front of her proud parents as one of her fondest memories at Georgia Tech.

Standing there accepting the award, Gowdy finally felt validated. “I made it, I’m doing it, and I’m here!”

Michelle at work in the GTRI Communications office. Photo by Sean McNeil.

When I saw that position open, I knew I had to jump at the opportunity.

Excellence that Translates from Campus to Career

Gowdy has now been affiliated with Georgia Tech for 11 years between her undergraduate and professional career. Many of her peers are surprise by her commitment to Institute as many have moved from place to place. GTRI has provided Gowdy with a stimulating environment from the day she walked through the door and into the Electro-Optical Systems Laboratory (EOSL) as a student assistant in 2008.

As a student assistant, Gowdy was not necessarily looking for a career or pursuing a dream, but sometimes dreams take time to formulate. At the EOSL, Gowdy was met by leadership who invested in her professional development, catering to her skill set as a liberal arts major. Excellent work rewarded her with new responsibilities and soon Gowdy was working on various projects from marketing designs to administrative work.

“In my work at GTRI, I’ve met and learned about people who had been here for decades,” stated Gowdy. “I saw stability, I saw longevity, and I saw there was a potential for a career here.” From that day forward, Gowdy’s dreamt of creating a career at GTRI, which she hoped that within ten years she could reach a senior position in the communications office. Progressing through the organization, Gowdy took on new roles with a willing attitude. Eight years later, the position of senior graphic designer opened in the communications office.

“When I saw that position open, I knew I had to jump at the opportunity.” Hard work and excellence paid off for Gowdy as she moved into her new dream role. “I now do what I love 100 percent of the time and have no plans to leave.”

In her current role, Gowdy acts as the visual eye for GTRI designs. She leads the creation of trade show and marketing materials, manages the designs of major publications like the newly redesigned GTRI Annual Report, and plays a key part in the creative direction for launching new sponsored-focused initiatives like the IMPAX division that began operation in 2017. She is recognized as the design expert for the organization, which she attributes back to the lessons she learned on campus. Like other alumni turned GTRI pros, Gowdy’s story is about perseverance, hard work, and excellence, but what’s unique about her story is that she chose to do so all at the place where it started. Georgia Tech continues to aid in Creating the Next® innovative leader who, like Gowdy, will push GTRI into the future.