A novel three-dimensional solar cell design will soon get its first testing in space aboard the International Space Station. An experimental module containing 18 test cells was launched to the ISS on July 18, and will be installed on the exterior of the station to study the cells’ performance and their ability to withstand the rigors of space.

The experiment was aboard SpaceX's Falcon 9 rocket that blasted off at 12:45 a.m. EDT from Cape Canaveral Air Force Station in Florida.

Built by coating miniature carbon nanotube “towers” with a photo-absorber that captures sunlight from all angles, the 3-D cells developed by Ready’s lab could boost the amount of power obtained from the small surface areas many spacecraft have. The cells would absorb light from any direction, eliminating the need for mechanical devices to aim PV modules toward the sun.

The PV cell experiment will be installed on the NanoRacks External Platform (NREP), where robustness of the solar cells will be studied under harsh space conditions for six months. The project is sponsored by the Center for the Advancement of Science in Space (CASIS), and the Space Station opportunity was provided by NanoRacks via its Space Act Agreement with NASA’s U.S. National Labs.

One virtue of CZTS photovoltaic material is its electron band structure, Ready explained. Like CIGS, CZTS is a direct band gap material. In semiconductor physics, this means incoming solar photons are able to emit current-producing electrons directly, rather than moving through power-robbing intermediate states as indirect band gap materials, like silicon, require.

Moreover, Ready said, direct band gap materials have good resistance to the powerful ionizing radiation encountered in space. That's because direct band gaps are larger than indirect band gaps; it's harder for radiation to damage these larger gaps so severely that functionality is seriously impaired.

The 3-D capability could prove especially valuable on the International Space Station, which is exposed daily to 15-16 sunrises and sunsets as it orbits Earth every 92 minutes at 17,150 mph. The 3-D towers can exploit the sun's rays for longer periods than conventional 2-D planar – or flat – designs, which work most efficiently only when the sun is directly overhead.

"With our 3-D design, as the sun's angle increases more surface is exposed and there's a growing chance that photons will enter," Ready said. "Also, 3-D technology provides more opportunity for photons to bounce around between the towers, increasing the likelihood they will be converted to electron hole pairs and produce mobile charge carriers."

As the ISS orbits, the 3-D arrays' performance will be compared to a high quality commercial 2-D planar cell array installed nearby. If things go as expected, GTRI's cells will provide relatively better performance than the other cells as they move away from high noon. The new CZTS 3-D arrays will also be tested in space against an older 3-D design made by GTRI using cadmium telluride.

One of the GTRI development team’s key achievements to date has been identifying the best ways to manufacture CZTS solar cells. The team has pinpointed techniques for successfully processing the four Earth-abundant elements into an efficient photo absorber.

"In manufacturing you have to heat these elements, and one major issue is that they evaporate at different rates," Ready explained. "Getting them to blend in the desired ratios, so that the stoichiometry is retained and electron levels of the constituent elements match up as they should, has been a challenge."

GTRI's photovoltaic arrays will be encased in Lexan containers aboard the ISS. Lexan, a clear yet strong polymer, produces minimal interference with incoming solar rays but can protect the delicate arrays from astronauts and space debris – and also protect the crew from any pieces of the arrays that might separate.

After the six-month mission, the solar cells will be sent back to Earth via a cargo ship. The research team will assess the cells’ post-mission performance and look for damage from radiation and other space hazards.

"If it can survive in space, which is the harshest of environments from the standpoint of wide temperature swings, radiation and numerous other factors, then we can be confident it will work well down on Earth," Ready said. 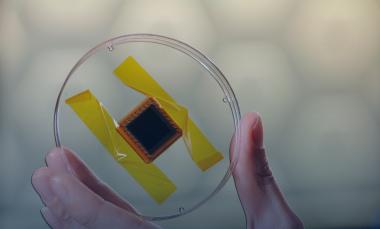 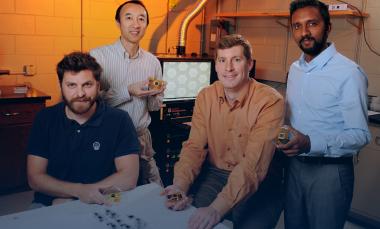 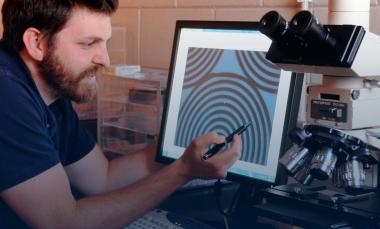 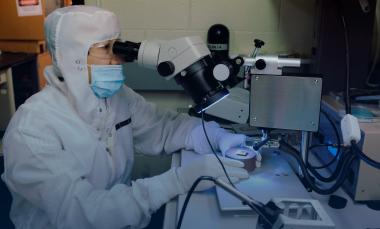